One of America’s favorite pastimes is baseball. Yet when it comes to home recreational activities, there’s another old time favorite. Trampolines.

The trampoline was invented back in 1887 to help firefighters catch people trapped in burning buildings. In 1936, two gymnasts created the modern day trampoline sold all over the world today. When a consumer purchases a trampoline, it’s not as durable as back then and it’s much more…bouncy! 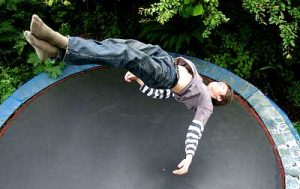 With that said, a recent study conducted by the Indiana University School of Medicine concluded that between 2002 and 2011 there have been 1,000,000 people injured in trampoline accidents. The injuries ranged from simple bruises to lacerations, broken bones and concussions. The unfortunate reality is that most of these accidents involved young children. Clinical research coordinator for pediatric orthopedic surgery, Meagan Sabatino, was part of this research group.

“These numbers are an estimate,” she said, “because we pulled data from hospital emergency rooms, which doesn’t account for the number of people visiting urgent care hospitals or not seeking treatment at all.”

A large number of doctors are now calling for a ban on trampoline sales. They cite that there was a spike in 2004 with 110,000 patients being admitted to the emergency room. And even with a decline in trampoline accidents, there was still 80,000 ER visits in 2011. Most of the injuries were broken bones. As a matter of fact, 95% of the trampoline accidents were breaks and fractures.

The American Academy of Pediatrics (AAP) and the doctors in the Indiana University study group both agree that more children than adults are injured on trampolines, and they consider this sports apparatus to be a “significant public health problem”. According to the IU School of Medicine, emergency room visits, related to trampoline accidents, cost over $1 billion over a 10 years period. In short, trampoline accidents cause costly hospital visits.

If you’re wondering what sorts of broken bones were being reported, they were broken ribs, spines and necks. The age range for the injured were from 9 years old to 16 years old, with the latter being more traumatic. Dr.  Randall T. Loder, chair of the IU School of Medicine and the study’s lead author, made his opinion perfectly clear.

“I think trampolines should not be allowed in backyards. It’s that simple,” he said. “It’s a significant public health problem.”

Were You Injured On A Trampoline?

Haggerty & Silverman has always been about clients, but we’re also family oriented. The safety of children and young adults has always been one of our priorities. It’s highly advised that you check with your insurance company to ensure that trampoline accident claims are covered.

In the event that you or your child has been injured in a trampoline accident on someones property or at a public facility, contact Haggerty & Silverman to see if you qualify for compensation. Medical costs these days are still skyrocketing, and you have a right to recover for any injuries sustained off your property. In the same light, if you have a defective trampoline, we can help you make all the legal decisions to recover damages from the manufacturer. 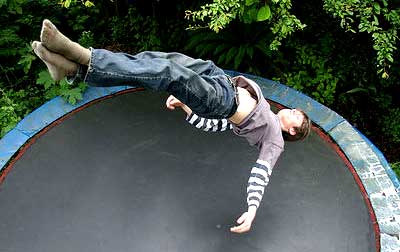