One of our paralegals got a call from a friend. A young girl they knew was sledding at a friend’s house. But, the children weren’t supervised and the young girl, Maddie, was hurt. Maddie spent several days in the hospital. She had a serious sledding injury. Could we help?

Maddie and some friends were invited to spend a snow day at a friend’s house. They were having fun, sledding down the hill. Then, the kids starting getting creative. Several kids got on the same small sled and went flying down the hill.

Maddie was in front sledding with two other children. They went down the hill, going faster and faster. It became clear they were going to hit a tree. There was no time to stop and the kids behind Maddie were all holding on to her. They went right into the tree. Maddie broke her foot in several places. Additionally, her leg and knee had injuries. She needed a couple of surgeries and had to use a knee walker cart for a while.

When children are sledding at a house, it is the homeowner’s duty to supervise. If kids start to get crazy, someone responsible needs to stop it to prevent an injury.

An adult was supposed to be watching the kids while they were playing. Instead, the homeowner didn’t. When the kids started doing stunts, an adult should have stopped it. But, no one was watching. An adult could reasonably foresee the danger. Kids can’t foresee the dangers. As a result, Maddie’s had a serious sledding injury to her foot.

Maddie’s injury happened at a friend’s house. That doesn’t mean the families don’t get along. There’s no animosity. But, Maddie had a lot of medical bills. This is the reason for homeowner’s insurance. It’s supposed to cover premises liability situations.

Most people believe filing a claim against homeowner’s insurance will raise premium rates. But the truth is, rates just go up. Unless a homeowner has several claims, it doesn’t usually affect the cost of insurance. Rates may increase the year after a claim, but this is usually coincidental. In larger damages cases, the insurance premium may go up. But, it’s still cheaper than the homeowner paying for the injury out of their own pocket.

We are always prepared to go to court for the people we represent. Our team doesn’t take cases we don’t believe in. Cases between family friends can be sensitive. It’s important for both sides to understand, we aren’t taking the homeowner to court. But, the homeowner’s insurance offered to settle the case for the policy limits. We discussed this option with Maddie and her mom.

After some discussion, Maddie and her mom agreed to settle their case. Maddie would get $300,000 to cover her injuries and medical bills. We even worked with her medical providers to reduce the bills so Maddie could keep even more money for the future.

Haggerty & Silverman has been helping injured people since 1994. If you have any questions about an injury, we can help.

Call or text us at 717-397-3200. Or, fill out our online form to schedule a free premises liability injury consultation.

The names have been changed in this case study. This is an actual sledding injury lawsuit handled by Haggerty & Silverman in Lancaster, PA. The facts of this case are true. 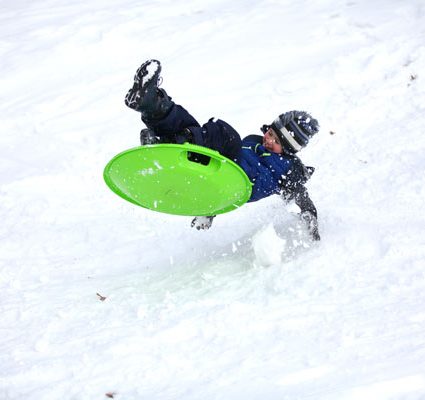