Amazon has become very ingrained in our society since its founding in 1994. Amazon continues to hit all-time high profits with over 4 billion packages delivered in 2020. Additionally, Amazon is on track to become the United States’ largest delivery service in 2022.

In Pennsylvania, if an employer dictates the schedule and movements of an independent contractor, that person is considered an employee under the law.

Why Does It Matter?

In Pennsylvania, these drivers could actually be classified as an employee of Amazon. But, why does it matter? How a delivery driver is classified matters for a variety of reasons, especially when it involves an injury.

Amazon Is In Charge

Although these delivery drivers may not be hired as employees of Amazon, Amazon still tightly controls all aspects of the delivery process. This is an important distinction in Pennsylvania.

Amazon is liable for employee drivers that operate under Amazon. However, when it comes to independent contractors, Amazon denies responsibility. Fighting Amazon could be an uphill battle to get the compensation you deserve for your injury. It’s important to remember, just because a company claims it is not responsible doesn’t mean it is true. If you are injured by an Amazon driver or independent contractor working for Amazon, talk to an injury lawyer for help.

On March 15, 2021 a father and his two sons were in a car driving on I-75. They were struck from behind by an Amazon delivery vehicle. The family of three stopped behind a stalled vehicle when the Amazon delivery van aggressively rear-ended them. Ans Rana, a 24-year-old aspiring doctor, faced the brunt of the impact as he was sitting in the rear of the vehicle.

Ans Rana suffered severe injuries as a result of this accident. With brain and spinal cord injuries, he spent months in the hospital on a ventilator, clinging to life. Prior to the accident, he was studying for his MCAT exam. Now, he may never have the opportunity to become a doctor. Due to the severity of his injuries, he is unsure if he will ever walk again.

This accident has dramatically impacted the Rana family. Not only did this accident cause severe physical damage, but it also changed their lives forever. In June, just a few months after the accident, Ans Rana filed a lawsuit alleging that Amazon is liable for the crash that changed his life. Proving that Amazon is liable in this case will severely impact the compensation that Rana could receive.

Amazon argues since the delivery driver that struck Rana is a direct employee of Harper Logistics LLC, they are not liable for the accident. However, Rana’s attorney is focusing on the fact that Amazon has control of every aspect of the delivery process down to the smallest details. Amazon is responsible for every move their ‘independent contractor’ drivers make. The company tracks every stop, turn, and acceleration of the delivery vehicles. Additionally, there are cameras to track cell phone usage, yawning, and more. With this level of control, surveillance, and tracking, how can Amazon claim the drivers are independent contractors?

While Rana awaits the verdict in his case, this opens a conversation regarding delivery services and liability. Is Amazon responsible for the actions of its independent contractors? Each situation will be different. While there may not be one clear-cut answer, nobody deserves to suffer as a result of another person’s actions. 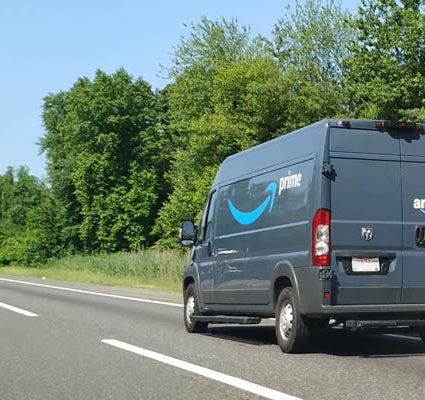